Out of comfort zone

Don't be afraid to step outside your comfort zone and do something, different!

As previously posted, I purchased a 2015 Kon tiki motorhome, that is 8m long and 2.35m wide.  That in itself is not that bad, however the gap between the driveway wall/post on one side and wooden fence on the other side, only left a margin or space of a few inches.

Under normal circumstances, this wouldn't really present a problem, however, seeing as the road itself is about 8m wide and when reversing you cannot actually achieve a straight-on position, the inevitable "crunch"-ing noise was heard.  Luckily, I think I escaped any structural damage and just broke the fibreglass outer protector (I say, luckily, could have done without it, but I suppose it had to happen at some point). 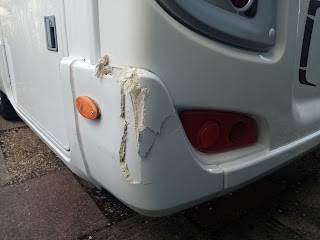 So, is reversing a massive great motorhome onto a thin spaced driveway getting out of my comfort zone? well, a tiny bit, but not really.

I had made a bit of room and cut the rockery in half to allow for getting the little Fiat 500 on/off the driveway, if driven straight at a certain angle: 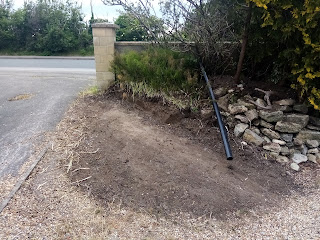 I then decided that the wall had to go.  Yep, I decided that the massive brick post and wall needed to be "trimmed" back to allow for more casual swinging onto the driveway and prevent any such future "crunches".

This is where the, out of comfort zone begins.... it initially was just a case of moving 1/2 tonne of soil out of the way, then deciding that I needed to remove the wall as well.... 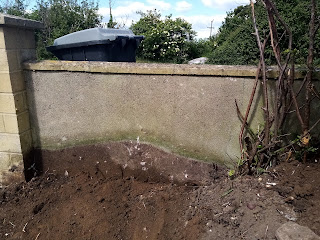 It was at this point, I noticed there was already a crack in the wall (you can see it on the right hand side), so this made my "how far along do I go?" decision for me! 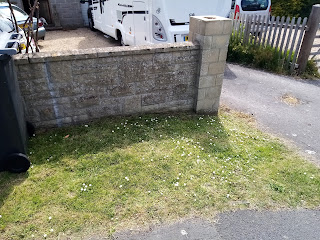 I then pondered my next steps very carefully... how to knock that wall down without sending chips of rock/stone everywhere and end up damaging all the vehicles?
Well, I dug out a bit more soil, there were actually large tree roots in that soil too, that went down a long way that I had to remove manually, that was fun! 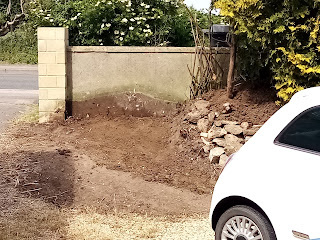 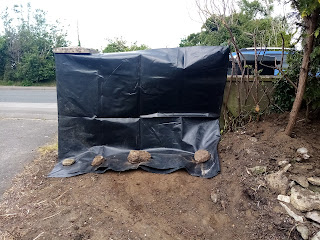 My genius idea was to put up a protective tarpaulin and then I could be "gentle" with some sledge hammers and knock down the wall bit by bit from the other side... 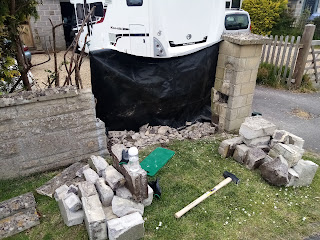 There you have it, with a bit of time & patience, I managed to remove the wall without destroying it into millions of bits (yeah, shocked myself there too!) and I even managed to topple the post with some nifty strategic removals that sent it "timber-ing" off to the left and missing any vehicles. 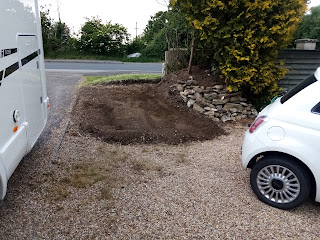 At this point, I thought, I'm pretty much done... oh, no, no, no.... that soil level that was on the other side of the wall is much higher and it raises to an unacceptable (and un-drive-over-able height)...sigh... so a lot more digging and soil removal commenced and a LOT of flattening down, raking, re-flattening, re-raking, flattening, removing of soil, you get the idea: 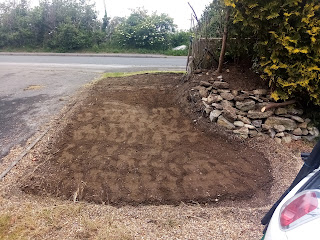 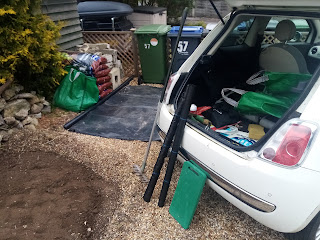 Suz's Fiat 500 provided shelter from the rain - oh did I not mention, the first 2 days were 20+degrees in heat, the second 2 days were rain, well, in between rain showers. 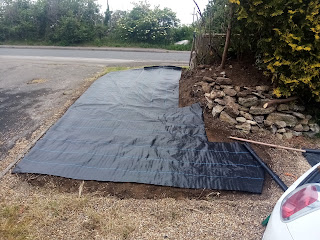 I managed to get the anti-weed layer down nicely and then off to Wickes I went to get 6x100ltr bags of that decorative bark - oh, in case you were wondering what happened to the "wall", there it is!  I'll leave it there incase I want to put it back at some point :-) 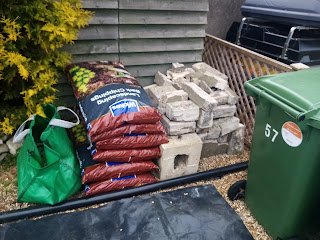 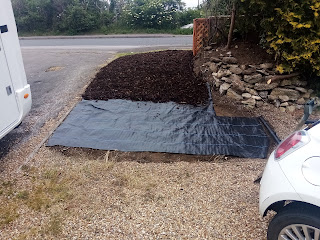 It was at this point I realised, I needed ANOTHER 6 bags of decorative bark, back off to Wickes... 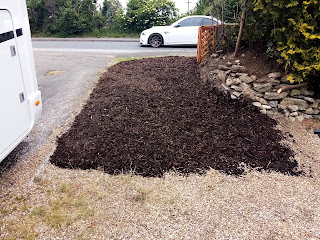 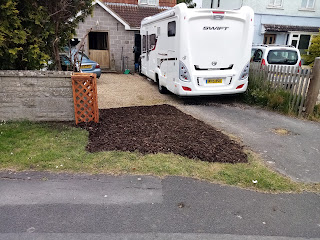 Mission accomplished!  I even brought a decorative trellis thing, cut it up and made it fit over the un-even end of the wall, I'll plant a nice plant that will grow up/around/through it so it looks better.
So, all in all, I now not only have access to swing the motorhome around like a loon and go in front ways, back ways and could probably even manage side ways, I've also opened up the opportunity to get both the Fiat 500 and the Jag on/off the driveway, which was an unexpected bonus!
After I took this photo and went back inside to clean up, it then rained a LOT, non-stop for about 14 hours!  I've kept a spare bag of the decorative bark for when it gets moved around / dries up and needs a bit replacing (it's not like I'm going to be driving over it everyday!)
I now have the peace of mind that I won't be damaging the motorhome when going in/out of the driveway - I still want to fit wireless cameras to the top rear roof sections though, so when I do reverse out I can see left/right and see what traffic is coming along the road, saves having the missus standing the other side of the road guiding me.
Labels: digging motorhome pigram wall 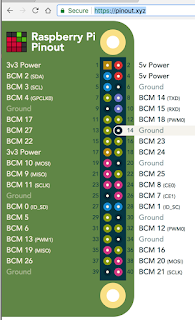 Using ROS to control GPIO pins on a Raspberry Pi 3 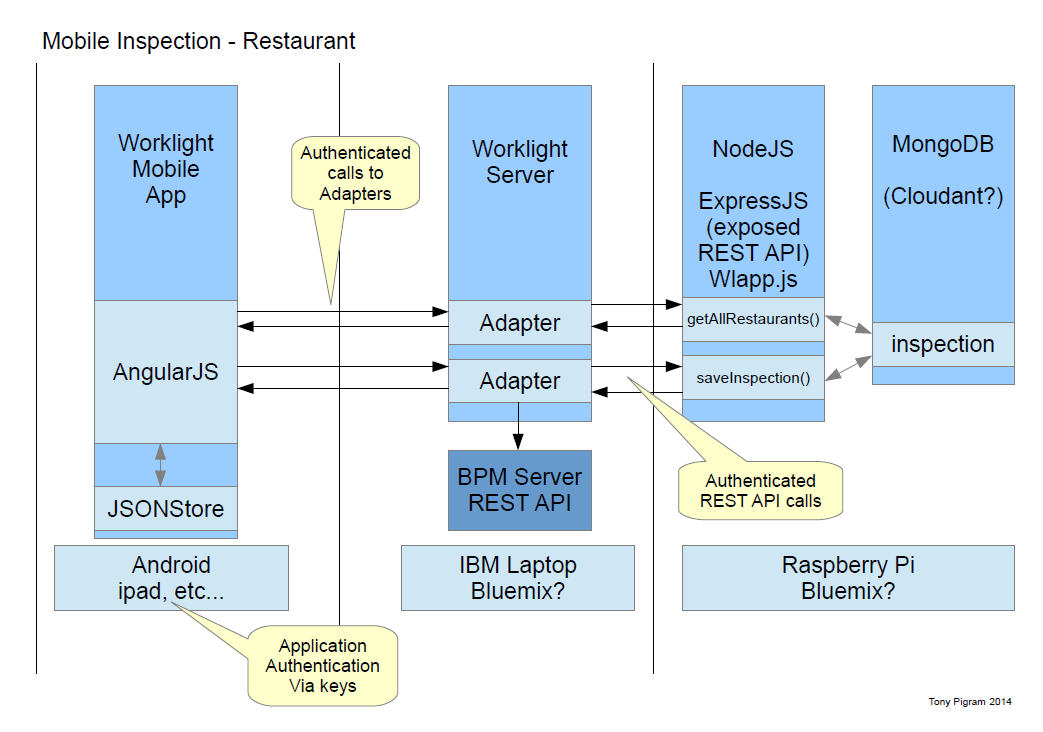 Tony Pigram
Done a lot of stuff, mostly techie, but have branched out over the last decade or so. Still like to keep "hands-on" even though corporations have devalued that skill and frown upon it https://www.linkedin.com/in/tonypigram/ http://www.kustomvanguard.co.uk/